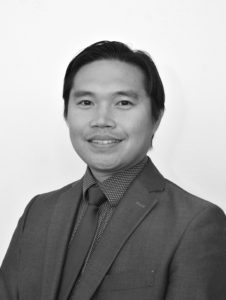 Jethrone Role, better known as Jet, finished his Masters of Science in Nursing at Loma Linda University (LLU) in June 2016. As a Registered Nurse for 10 years, he gained various clinical experiences in areas like medical-surgical, telemetry, and critical care. He started his nursing career at White Memorial Medical Center in Los Angeles, CA, and moved to Loma Linda Medical Center in 2008. Loma Linda University Health gave him opportunities to grow. He obtained his certification in Critical-Care nursing through the American Association of Critical-Care Nurses (AACN) while working in the medical ICU. He also became a clinical instructor for LLU School of Nursing for about 3 years. In 2014, he was accepted as a nurse management resident at Loma Linda University Health. The nurse management residency is a 2-year program designed to develop the professional nurse into a clinical leader. This program also gave him a full scholarship to finish his graduate studies.

The journey started for Jet, many years ago. Growing up in the Philippines, Jet have always had this dream of working in the medical field, helping and assisting sick people. He planned to pursue Medicine. However, after a US based Registered Nurse came to the Philippines and gave a motivational speech, he was inspired that becoming a nurse is his calling. After graduating from the Adventist University of the Philippines with a degree in Nursing, Jet had the chance to come to the United States and practice his profession.

To Jet, working as an ICU nurse for years was fulfilling and rewarding. It was here that he witnessed people from all walks of life, whose lives took different turns because of illnesses and accidents. It was here where he met people in the “lowest” points of their lives. And having this power to be able to do something for them, because he is a nurse further justified that he has chosen a path he was called for by God.

He also realized in his experiences, that having a good leadership is an important factor that affects nurses and patient care. On an interview with the LLU Nursing Leadership team one day, Jet, voicing out his frustrations, was challenged by one of the Chief Nursing Officers that being in a position can be a way to create change. This became a moving influence that paved a way for him as he transitioned from being a bedside nurse to leadership and management.

Jet is very passionate in employee engagement and process improvement. During his years in the ICU, he led a nurse driven change committee called “Kaizen Team” to improve processes and engage his co-workers in the unit. Through his leadership, the Kaizen team launched the Ivory Room project, a project that minimizes medical supply waste, and started a monthly newsletter called Kaizen Report. His passion continued through his management residency journey. During his residency, he coordinated multiple projects including the installation of 200+ new inpatient beds across the entities of Loma Linda University Health, and conducted a plan-do-check-act study to improve patient flow and implementation of an electronic bed capacity dashboard at Loma Linda University Behavioral Medical Center.

Jet is married to Jewel, a nurse at LLU Medical Center, and they are blessed with 2 kids, Julienne and Jayleen. He also enjoys photography, traveling, team sports, and is a very active church member of the Loma Linda Filipino Church.