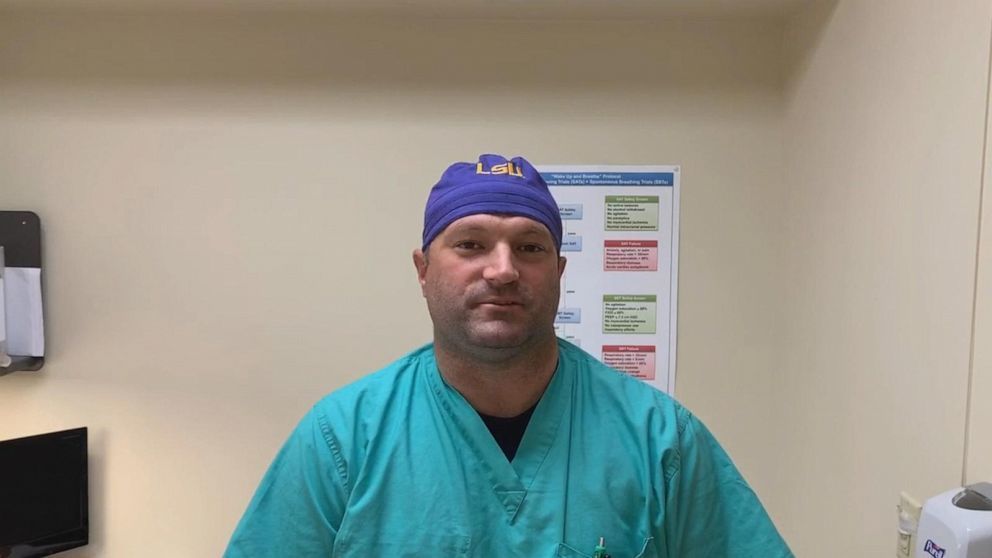 Weeks before COVID-19 reared its ugly head in Louisiana, James and Katie Bamber made a plan.

“Our game plan was for him to, you know, stay elsewhere so our family would be protected,” explained Katie, the emotion in her voice coming through even over video chat.

James is an ICU nurse at Ochsner Medical Center in Baton Rouge. He has three young kids at home, and Katie was pregnant with number four when the outbreak began. Add to that Katie’s older parents, who share their home, and James had half a dozen vulnerable reasons to keep the virus he would encounter at work as far away as possible from his home.

When infected patients came under his care in early March, he moved out, staying instead with his sister Kaylie and her husband Blake. Kaylie is an occupational therapist and also shared a risk of exposure from patients, so the arrangement made sense.

Even so, James took extra steps anytime he left the hospital. Ochsner provides staff with an extra set of scrubs so they don’t have to bring them home. James even kept an extra pair of shoes in his car that he never wore inside the hospital, and it was straight to the shower when he got to his sister’s house at the end of each shift.

This was James’s routine for more than four weeks. Uncomfortable with any extra attention, he simply says he’s doing his job.

“It’s a small sacrifice compared to what the patients and the family members of this virus are having to go through,” said James. His wife, a hospice nurse, isn’t as shy about sharing her pride, or her fear.

“It’s been difficult, but I’m so incredibly proud of him and his coworkers and anybody on the front line. I can imagine that it’s scary for them to walk into work everyday,” said Katie.

To keep the family connected, James and Katie rely on Facetime and phone calls between his shifts. On his days off, James drives to his home and sits outside the window to talk to the kids 6-year-old Matthew, 5-year-old William, and 3-year-old Grace face to face.

“We get him on speaker phone, he stands at the window and the kids, like they know the routine as soon as his car hits the driveway,” said Katie. “They grab their three little chairs and they sit at the window so they can see their daddy.”

When it was time for the baby to arrive, James and Katie had a plan for that too.

“The plan was for me to not go into the delivery room. I did not want to expose my unborn child, or my wife, or the labor and delivery staff,” said James.

When Katie went into labor in the predawn hours of April 3, her mother drove her to Oschner and returned home to care for the older siblings. Katie would give birth without her family or her husband by her side. The only familiar face was a best friend who just happened to be the midwife on call that morning.

James had planned to stay at this sister’s house and wait for updates, but that didn’t last long.

“I panicked. I had to be as close as possible to her so, I threw some clothes on, drove to the hospital, and sat in the parking lot just waiting to get updates,” said James.

The labor and delivery staff went out of their way to make sure James was as much a part of the delivery as he could be, constantly sending him pictures and videos and calling him on video chat.

“The only way I can explain it is God’s grace. That’s it,” said Katie. “All the nurses and staff there were incredible. They made sure everything was the best it could be for us.”

When the baby, a boy named Andrew, made his debut a nurse called James and told him to run out to the sidewalk. She held Andrew up to the window, just moments old, while his dad waved from below.

“That was the most emotional part to me I feel like,” said Katie. “ Immediately I get to touch him and smell him and hold him and I can’t imagine for James what that was like.”

James says he only felt relief and happiness that his wife and son were healthy.

“It was kind of like the Lion King, I thought at first, but it was great,” said James.

Katie and the baby were able to go back home after a couple of days, but James would have to wait nearly two more weeks. While he had time away from work, he still had to go through an extra self-isolation before hugging his wife and kids and meeting his newest son.

That was the most important moment of the Bamber’s plan, one that fell on Easter Sunday.

“I’m excited and anxious to get my hands on him. It’s been close to a month since we’ve been able to be close to him,” said Katie. “They’re ready to get their hands on their daddy.”

Their neighborhood was quiet Easter morning, with clouds hanging heavy above. In the window, the eager faces of Matthew, William, and Grace peeked through the curtains every few minutes. When James’s SUV pulled into the drive, the kids came running out, squealing. William got there first, jumping into his dad’s arms with his older brother and little sister close behind. Right behind them was Katie with Andrew held close. For the first time in more than a month, the Bambers were back together.

“Look at this one, he’s my twin,” laughed James as he held his baby boy.

James will get a little more than a week at home before heading back to work and back into isolation. He says the need at the hospital is just too great right now. But, that’s a plan his family says they are ready for.

“I know there’s a lot of people going through a lot worse than us. Like I said, this sacrifice is small compared to what people affected by the virus are having to go through. It really ended up being a beautiful experience,” said James.

Thank you Jason  for your commitment, dedication, and compassion for your patients and communities.