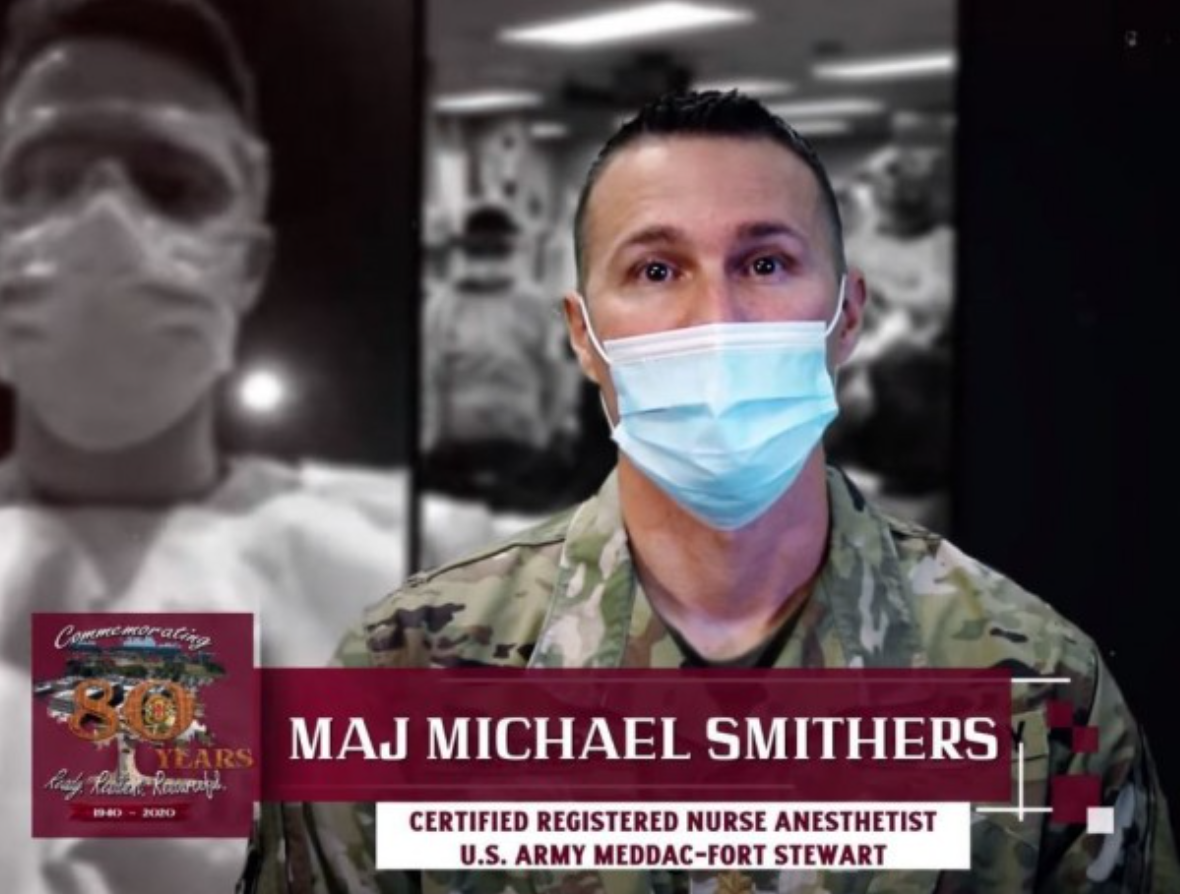 Maj. Michael Smithers, a Certified Registered Nurse Anesthetist at Winn Army Hospital, was called to support the frontline fight against the coronavirus in New York in April, recently returned to Georgia with lessons learned.

Assigned to the 531st Hospital Center on Fort Campbell, Kentucky, and a native of upstate New York, Smithers said he deployed to support the Jacob K. Javits Convention Center in New York City, to help convert the facility to a hospital and assist victims of the coronavirus there.

“I got the call and was at Fort Campbell within 48 hours,” Smithers said. “Twelve hours later I was in New Jersey. The next day, I was in New York.”

He noted in his youth in New York if you stepped into the street, odds were you would be hit by traffic.

“When I got off the bus. The streets were empty,” Smithers said. “You could walk off six blocks and not even look both ways, and that was an eerie feeling."

They were soon busy at work, surrounded by co-workers charged with setting up a hospital at the Javits Center.

Col. Jamie Green, New York Army National Guard medical liaison at the Javits Convention Center, was brought in to help bring the military together and organize the hospital.

Green said the tasking was different from his other deployments, noting the team was charged with establishing a 3500-bed hospital in four weeks from scratch.

Most of the Green’s other deployments have been combat-related.

“So, it's a little different this time,” Green said.

The incident commander, Col. Dennis Charles Deeley, the J2 of the New York Army National Guard, said the Javits medical station had about 2,293 people working together, representing about 20 various agencies.

Deeley said their mission was to relieve pressure from the New York City Hospital system and give them room to operate.

Smithers described how their roles evolved as they spent time on the ground. He said the medical director of the center, Dr. Sean Shirley, helped sort out the medical piece and determined the CRNAs assist with ventilator management.

“I took care of patients in the (Intensive Care Unit) --primarily ventilated patients,” Smithers said. “I managed their ventilators, ventilator settings, sedation and provided the care they needed.”

He said as the mission evolved, they also managed code response and rapid response on the non ICU side, helping nurses and physicians where needed.

After seeing more than 1000 patients during his deployment with Javits, Smithers returned to Fort Stewart with an abundance of experience to share with his co-workers at Winn ACH.

“If the need arises, I feel comfortable knowing we can take care of our patients,” Smithers said.

Thank you Michael for your commitment, dedication, and compassion for your patients and communities.