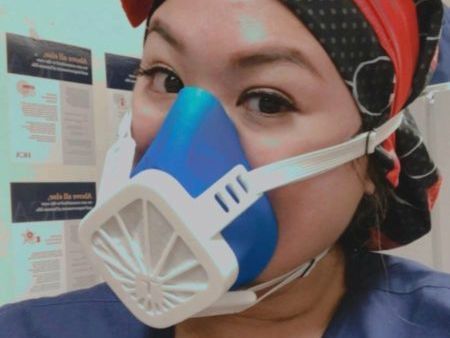 Today we want to honor Melissa Antolin, RN, a nurse at West Hills Hospital in Los Angeles, California. Here is her story as reported by Emily Alvarenga for The Signal.

As Castaic resident and registered nurse Melissa Antolin drives to work at West Hills Hospital, she sees a sign that reads: “We stand ready, and we stand together.” “It’s on a billboard, and I see it every day on my way to work,” Antolin said. “It’s sort of like my mantra.”

It’s this simple saying that helps her to start each day working in the coronavirus ward of the hospital with positive thoughts in her head, thinking to herself, “We’re ready, we can do this. We have everything that we need, and as long as we’re working together, we can definitely handle whatever comes our way,” she said. About a month ago, Antolin’s life completely turned upside down when her hospital received its first COVID-19 patient.

“There was a lot of apprehension about who was going to be assigned to that patient,” she said. “I think I just felt like I needed to volunteer to take care of the patient because there are a lot of other nurses who still have little babies at home or their parents live with them.” Though she, too, lives with her father, he was out of the country on vacation at the time, but it wasn’t long before her father returned home, just as things started to ramp up and Antolin’s unit was designated as the COVID-19 ward in order to keep patients contained to one area of the hospital.

“Knowing that because I was going to be so exposed, and that there was such a big risk of me possibly taking this (virus) home with me, despite (all the precautions I was taking), I quickly made the decision to move out,” Antolin said. “If I can take that extra step and protect the people that I love, then that’s something I’m going to do.”

Antolin didn’t want to put her friend in danger, either, but the friend insisted. “She was like, ‘No, I will literally move out of my house so that you can live here and have a place to relax, recharge and rally for your next shift. I will do that for you.’” Melissa Antolin, a registered nurse working in a COVID-19 ward at West Hills Hospital, shows off her personal protection equipment, or PPE. Courtesy “I’m just so thankful because I know that other nurses have families at home (and can’t do the same),” Antolin added. “I just feel very lucky and grateful to say the least.”

Now a month later, Antolin says she’s literally dealing with the pandemic at every moment. “It’s taking over a lot of my life, as I’m sure it is for a lot of people right now,” she said. “It’s been super challenging because things are changing almost daily. And, there has definitely been a learning curve because this is something that none of us have ever dealt with.”

Nearly every day, Antolin and her colleagues are learning more about the disease and how to treat the patients who contract it. “It has been this sort of slow process, learning what really works for us and how we can work together as a team to take care of these patients,” she added. “Now that we’re really starting to see more patients come through, it almost seems like we have a general picture, but nobody exactly fits the mold as far as who is coming in with the virus.”

It’s these nuances that have been the most challenging, she said. “You may think that you have a grasp on what you can handle,” she said, “and then you’re thrown into this (situation) where things change very quickly.” One thing that hasn’t changed is the steps these health care workers take to protect themselves with the use of personal protective equipment, or PPE.

“When this first started, I kind of accepted that there is a very big possibility that I may get this virus, just because of how contagious it is, but at least if we have the equipment, we can do our best to protect ourselves so we can take care of the patients,” Antolin said. “If that happens, at least I knew I did everything I could do to be safe.”

Each day, they work to ensure they’re using their PPE resources wisely and are making the best use of their time. “There’s this thing in nursing where when you go in to see a patient, you want to make sure that you can put everything together so that, at least in this case, you can minimize your exposure to the patient,” she said. “You want to make sure that you’re sort of gathering everything that you can to do it all at once versus having to go into a room multiple times. That’s been a really big challenge.”

As testing capacities continue to increase, it gives them the information they need quicker. “Testing is a lot faster than it was even just a week ago … versus having to wait four to six days for results to come back, we know right away, and then we know what kind of precautions to take in taking care of (patients) and how much protective equipment we need to use,” Antolin added. “We’ve been a lot more efficient that way.”

And as testing expands, so does their experience. “There definitely is a big sense of relief, obviously, when (a patient) gets that negative result back, but then when it does come back positive, then at least we have that plan for care in place,” she said. “We’ve already planned for this, so in that way, at least if they’re nervous or they’re scared about having to fight this virus, at least we can reassure them that we have a plan and that we know what we’re doing to take care of them.”

While Antolin continues to wait for the surge of patients they’re likely to receive, she remains focused on the positives of her situation, such as the fact that her commute has been nearly cut in half due to everyone following the “Safer at Home” directive. “This is challenging for everybody to have to shelter in place, but it really helps that there are people who want to support us and do the best that they can to help control this thing,” she said.

The community has also stepped up in a number of ways to help health care workers such as herself, Antolin added. “Our hospital has provided us with the necessary tools, but because there’s such a shortage, one of the doctors at the hospital that I work at organized a GoFundMe in an effort to raise money (for PPE),” Antolin said. “The response from the community was actually really, really overwhelming.”

The money raised allowed the hospital to purchase the equipment they need to be protected from head to toe. “It honestly goes a long way to helping us feel protected while we continue to do our job and take care of these patients.” A friend has also donated his time in 3D printing mask holders for Antolin and her coworkers, helping to relieve the tension masks put on their ears and making them more comfortable.

“We’re definitely well fed, too,” she added. “The community has been really supportive in purchasing meals for us. Almost every shift that I have worked, there has been sandwiches and yummy snacks to fuel our days.” With the support Antolin has received from the community as well as her team of nurses, she feels they truly do “stand ready and stand together,” as the billboard says.

Thank you to Melissa for your commitment, dedication, and compassion for your patients and communities.