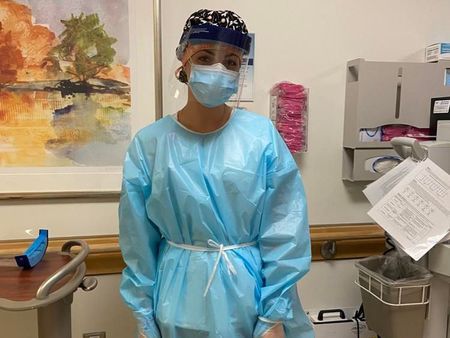 Today we want to honor Morgan Nicholson, RN, is a nurse at the UPMC Presbyterian Hospital in Pittsburg, Pennsylvania. Here is her story as reported by Joel Whetzel of the Bradford Era.

With the world battling against COVID-19, former Kane resident Morgan Nicholson felt called to help. A nurse, alumna of Bloomsburg University and 2014 graduate of Kane Area High School, Nicholson was living in Pittsburgh with her fiance and working in the intensive care unit at UPMC Presbyterian and was hearing about how dire the situation in New York City was getting. Meanwhile, at her own hospital, things were still relatively calm.

“After hearing how bad New York City was getting hit, in Pittsburgh we were gearing up for this surge. We were waiting,” Nicholson explained. “We started taking care of some patients, but really we were pretty empty in our hospital in general, so people started having to take (paid time off) because we didn’t have patients to take care of.”

And so, Nicholson decided to join the frontlines, and took a job as an ICU nurse in New York — all without being able to return to a job in Pittsburgh when she’s finished. “They wouldn’t allow me to stay on payroll, so I decided to quit and take this opportunity,” she said. “I kept hearing about how they need ICU and travel nurses because of how sick these patients are. I talked to my fiance and said I feel I should go… I felt like I needed to do this.”

Nicholson delivered her two-weeks notice to UPMC, but within about 10 days she was off to Long Island, where she’s currently residing with a roommate at an AirBnB. She’s been in New York since April 18 and is on an eight-week contract with the NYU Winthrop hospital until June 13.

“It’s definitely one of the scariest things I’ve ever done. Pittsburgh was a huge step in itself for me moving to a city,” Nicholson said. “The fact I decided to quit and move to New York, it was wild… It’s definitely been a whirlwind of a couple weeks. I’m still adjusting, but things are going pretty well.” Thus far, her time at the hospital has been “extremely busy” because the facility has doubled its capacity.

“They’ve turned cafeterias, basements, everything into ICUs,” Nicholson said. “A portion of the hospital is just rows of patients lined up with no curtains, and they’re all intubated. It’s some of the wildest things I never thought I’d see. They’re just overflowing, but it’s better to just have a bed and be anywhere in the hospital than not here (if you have COVID-19).”

When on her night shift — 12 hours per night, four days per week — Nicholson is tasked with caring for two patients, sometimes three, which is about average for ICUs. “I was very happy, because I had heard about nurses having five or six ventilated patients, which is a lot to care for,” she said. “I’ve only had two or three, and they’re definitely very sick patients.”

And caring for those patients is an experience unlike any she’s had before in her career. For starters, Nicholson wears a bevy of protective equipment, including a face shield, a mask, a gown and more. It all has to remain on the entire duration of her shift.

“The masks are tight and press around the face. They have to be tested so there aren’t leaks anywhere in the mask,” Nicholson said. “They’re very tight on your face. After two shifts in a row, there’s skin peeling off my nose because they’re so tight and not made to be worn for 12 hours straight, but these are different circumstances.”

As for the care itself, Nicholson is in a somewhat familiar situation, as many of her patients in Pittsburgh came in due to pulmonary issues. However, treating the coronavirus has proved to be a unique challenge, as what works for one patient may not for the next.

“Normally we know how to treat everyone. We do the same thing for everybody like an algorithm,” Nicholson explained. “For this, we don’t know exactly what’s working or not working until it doesn’t work… So each patient is very different, and we’re trying to figure out what works best. Not everything works the same between one person and the next.”

What is common between patients is “proning,” during which nurses flip patients onto their bellies for 16 hours a day to help facilitate the flow of oxygen in the lungs. “Normally, with pneumonia and the regular flu, it’s like a last-ditch effort, but it’s being used much more frequently here,” Nicholson said. “There’s a whole team of doctors and nurses dedicated just to coming around the hospital and flipping patients.”

The emotional toll is hard for all involved. No visitors are permitted for COVID-19 patients, so Facetiming or calling family members are the only options for those who are sick. “I can’t imagine having my loved one in the hospital and not being able to visit. That aspect has been very hard,” Nicholson said.

Once her contract expires in mid-June, Nicholson isn’t sure what she’ll decide to do next. She has a PRN position with the Geisinger-Bloomsburg hospital, but also eventually wants to return to her fiance, who she’s only been able to Facetime with since moving. She says her decision will be based on what’s happening with the virus when it’s time to make the call, but knows she’ll be well supported either way.

“I don’t think I could do it without (my fiance), my family and my hometown’s support. Everybody has been super helpful,” Nicholson said. “I’ve had so many people reach out to me. It’s amazing the amount of support I’ve gotten.”

Thank you Morgan for your commitment, dedication, and compassion for your patients and communities.