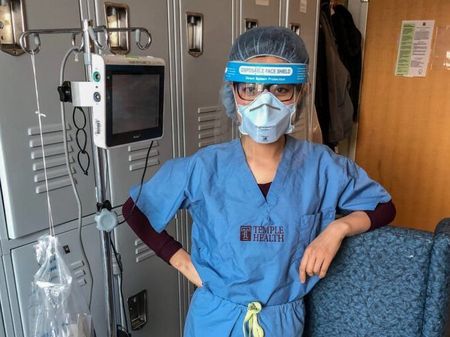 Today we want to honor  Nanzhou Guo, NP, a Nurse Practicioner at Temple University Hospital, Philadelphia, Pennsylvania . Here is her story as reported by Nina Feldman of Whyy.org.

The night before her first day in the COVID unit, Nanzhou Guo was packing her bags. It was March 31 and the scene in New York was all over the news: lines spilling out of emergency departments, exposed health care workers making impossible decisions about whose lives to save. Guo, a nurse practitioner in Temple University Hospital’s pulmonary department, heard from her colleagues that there weren’t enough N95 masks to go around. So, she threw a few extra respirators she had lying around into her suitcase, just in case she needed to provide her own.

She said goodbye to her kids, ages 3, 7 and 11. She was terrified. “I’m just telling them that mommy has to go to war — it’s like the war,” said Guo, 35. “If mommy’s ok, mommy can come home.” Guo wasn’t just going to the hospital for the day. She lives in far Northeast Philadelphia with her husband, kids and mother-in-law, who is 71 and has a handful of chronic health issues. She didn’t want to risk exposing her family, so instead of coming home between shifts, she’s moving into one of Temple’s student dorms. When in-person instruction was cancelled, Temple’s students were sent home. Now, their empty rooms are now open to health care workers like Guo who choose to isolate.

Even though she thought it was the right decision, Guo was nervous. Her husband even asked her to quit her job. “I can’t say, ‘No, I’m not going back,’” said Guo. “There won’t be enough medical providers for these patients, and it’s the career I chose.” Guo showed up for her first day in the unit on April 1. And what she found surprised her: It seemed like the hospital was prepared.

Temple University Hospital is treating more COVID-19 patients than any other in the city. As of Monday, there were about 200 COVID-19 patients in the hospital. Of those, about half need advanced oxygen, and roughly 14% are on ventilators. As of last week, the death rate at the hospital was about 4%. But doctors and nurses there say that while the number of cases is growing, so far, they can handle the surge in patients. The ICU in the COVID-19 unit is approaching 90% capacity.

Doctors at Temple spoke with colleagues in Wuhan, China, where the pandemic began, to learn what they needed to do to prepare. First, doctors there told them to designate an entire building as the COVID-19 hospital to avoid infecting other patients, which is what Temple did at its Boyer Pavilion. When patients are admitted through the emergency department, they are sent to that building.

“It’s a manageable problem overall,” said Gerard Criner, who is overseeing the COVID-19 care at Temple and is also the chair of the department of thoracic surgery and medicine there. “I mean, there wasn’t a lot of time to plan, but there was time to plan to some degree.”

Another lesson from Wuhan: Results from the nasal swabs used to test for the virus take too long, and they can be wrong up to a third of the time. That makes them an unreliable diagnostic tool. So instead of waiting for those results, Criner’s team started running CT scans on patients as soon as they came in, and diagnosed them based on imaging of their lungs.

From there, depending on their symptoms and which other illnesses they have, patients might be enrolled in a trial to see if certain drugs could hasten their recovery. Temple is participating in phase 3 trials for remdesivir — a drug without any current approved use, but which has demonstrated some promise in reducing symptoms of SARS and MERS and is being tested on COVID-19 cases with varying degrees of severity. The hospital is also working with a range of antiviral agents to attempt to mitigate the cytokine storm many COVID-19 patients experience — that’s the immune system’s overblown response to the virus, and often the cause of fatal complications.

Criner said that while the coronavirus may be new, many of the complications it causes aren’t. “We’re used to taking care of sick patients,” he said. “This kind of stuff is what we’re prime for.” Nearly 80% of residents in Temple’s direct service area are on Medicaid or Medicare, and a quarter of them live below the federal poverty line. The rates of chronic illnesses, like diabetes, obesity and heart disease, are higher than city averages in North Philadelphia and the Riverwards, the areas from where Temple draws most of its patients.

Two weeks after she left home to work in the COVID-19 unit, Guo had settled into her dorm room, which sounded a lot like what it’s like to move in as a college student, quirks and all. The mattresses all sagged in the middle; the water took 20 minutes to heat up as it cycled through the building. Guo brought microwave noodles in case she got hungry, medical books to study at night and a yoga mat to keep her occupied. On her days off, she WeChats with her kids. She helps them with their Chinese homework and makes sure they’re practicing the piano. She said it’s still surreal, but she’s getting used to it.

“I hope this thing goes away very soon, but it feels like more of a, ‘Hey, we have this, we got this,’” she said. Initially, Guo was worried about having enough masks, but she gets a new N95 each day, which she can disinfect under a UV light daily. She feels supported by her colleagues, and the leadership.

Guo isn’t working with the sickest patients on ventilators, but she is treating patients who need oxygen to breathe and who have other health problems like lung disease and obesity that can make the coronavirus more serious. She said because of their comorbidities, many of these patients are no strangers to serious illness.

“They know that when they get sick, they get sick.” But the more patients she sees, the more she identifies familiar problems that she and her pulmonary colleagues know how to treat. Guo said the biggest difference in her work since the start of the pandemic hasn’t been the type of care she offers. It’s been the loneliness and anxiety patients feel because there are no visitors allowed in the hospital.

They spend long hours in small, windowless rooms, often repurposed for long-term recovery. They wait alone, on uncomfortable stretchers, because beds don’t fit through the smaller doorways. Guo recalled one patient who was in stable condition, and preparing to be discharged, but was still riddled with fear. “[The] gentleman said to me, ‘Am I gonna die here?’ and he was doing fine,” Guo recalled.

Guo said the longer she’s there and the more comfortable she gets with the new protocols, the less vulnerable she feels. It makes her feel less like she’s going off to war, and more like she’s just showing up for work. Temple is discharging upwards of 20 COVID-19 patients each day. Of the 11 patients Guo treated the day we spoke, three were well enough to go home. Soon, she’s hoping for a long enough break in her shifts so that she can, too.

Thank you Nanzhou for your commitment, dedication, and compassion for your patients and communities.